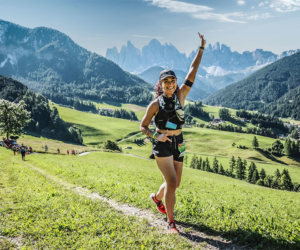 The Villnöss Dolomiten Run leads 22 kilometres via St. Magdalena in Villnöss to Brixen. The breathtaking panorama around the Geisler peaks accompanies the runners on this pleasant run. The Villnöss Dolomites Run celebrated its premiere in 2021 – and it was more than successful. Numerous pleasure runners registered for the run, looking for a physical challenge in the midst of a magnificent natural and cultural landscape.

This year there is another novelty to this run: the FunRun. The run can be tackled without timekeeping, without time pressure and completely according to one’s own fitness. Around a quarter of an hour after the official start of the Villnöss Dolomites Run, the FunRun participants go to the start. “You don’t need a medical certificate, you can register for the run without any complications,” says the president of de LOC Christian Jocher. The special challenge of this run is the skill and agility of the runner, after all, there are over 1,000 metres of downhill altitude to overcome here. The participants of the Villnöss Dolomiten Run and the FunRun are expected at the finish line at the cathedral square in Bressanone.

Athlete sheets and programme overview Dear participants, the countdown is on! There are only a few days left until the running weekend of , the…

The countdown is running

The Runner’s Party at the Alte Schlachthof A strenuous day of sport has to be celebrated properly, doesn’t it? This year there will be an…