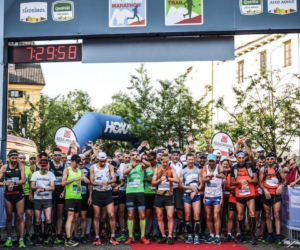 Brixen is looking forward to its spectacular mountain running weekend

The cathedral city will once again become a (mountain) running mecca this weekend. After all, the 12th edition of the Brixen Dolomiten Marathon is scheduled for Saturday, 2 July. The popular and renowned event, which offers a choice of five different distances, will kick off with the Women’s Run Brixen on Friday evening. The final preparations are almost complete and the weather gods also seem to mean well with the organisers around OC head Christian Jocher.

Everything is set for the big running party in Brixen, which can be held under “normal” conditions for the first time in three years. The organising committee is particularly pleased that almost perfect weather conditions are forecast for Saturday. After all, the meteorological conditions for an outdoor event like the Brixen Dolomiten Marathon are the be-all and end-all. “As of today (Wednesday, editor’s note), Saturday is supposed to be a brilliantly beautiful day with only a few clouds. The perfect mountain weather, which will possibly encourage many family members and fans to follow our races on the Plose or somewhere along one of the routes themselves,” says OC head Christian Jocher.

The running event already starts one minute after midnight, when the starting signal for the Dolomiten Ultra Trail is given at Domplatz. From here, the top athletes set off on an 84-kilometre route in the fantastic mountain world of the Dolomites with no less than 4728 metres of altitude difference back to the finish at Domplatz. The Dolomiten Ultra Trail must be completed in teams of two – also for safety reasons.

The Brixen Dolomiten Marathon is the heart of the event

On Saturday, however, the biggest focus will once again be on the Brixen Dolomiten Marathon, with which it all began in 2010. This classic event still attracts the largest number of participants to the start in front of the Bressanone Cathedral. The 42.2-kilometre mountain marathon starts at 7.30 am. The finish: the summit of the local mountain, the Plose, at 2450 metres above sea level. A second competition, the Dolomites LadiniaTrail, also ends there. The 29-kilometre run, with around 1852 metres of altitude difference, will start in the Val Badia in St. Martin in Thurn at 8.30 am.

Athletes can also choose from the Villnöss Dolomites Run (22 km/385 hm), which is celebrating its second edition this year. The race starts at 9 a.m. in St. Magdalena in Villnöss and runs through the idyllic Villnöss Valley to Brixen. This race, in which the participants have to master 1070 metres of descent, takes place both as a competition and as a fun run. To take part in the non-competitive Fun Run, you don’t need a sports doctor’s certificate, as no time is recorded – it’s all about the entertainment on the panoramic route. The mayor of Villnöß, Peter Pernthaler, will also be taking part. Spontaneous registrations are still possible.

750 participants, 35 nations and a fantastic supporting programme in Brixen

Taking these four distances together, the organisers have already reached the remarkable number of 750 participants from 35 different nations, including some exotic countries such as the Seychelles, Australia or South Africa. If you add to this the participants in the Women’s Run Brixen, the total number of registrations is almost 1300. This makes the Brixen Dolomiten Marathon one of the biggest running events in South Tyrol.

A great sporting spectacle also includes great celebrations. Last year’s edition was still subject to the strict Covid19 restrictions, which meant that no afterparty could be held after the race. That is not the case this year, which is why the OC team has planned quite a few things. “First of all, there will be an Expo & Pasta Party from 1 to 6 p.m. on Domplatz. Directly afterwards, the big award ceremony is on the programme. The evening will be rounded off with the Runner’s Party at the “Alter Schlachthof” in the old town of Bressanone. So the supporting programme is something to be proud of: An unforgettable running weekend is guaranteed in Brixen,” says Christian Jocher, head of the OC.

The big running weekend in the Eisack Valley opens with the Women’s Run Brixen. The 4.2 km long charity run with a maximum of 500 participants, which this year calls for the fight against violence against women, will take place on Friday evening, 1 July, with the starting signal at 8 pm. As the women’s run is being held for the 10th time this year, men are also allowed to participate as an exception. They will run a lap through the city centre to show their solidarity in the fight against violence against women. A children’s run will take place beforehand from 4pm.

Athlete sheets and programme overview Dear participants, the countdown is on! There are only a few days left until the running weekend of , the…