The eleventh edition of the Women’s run Brixen is on the programme this year. The tried and tested remains, but the date of this year’s run is new. As the Brixen Dolomiten Marathon will not take place this year (see report), the Women’s run Brixen will be held on Friday, 1 September 2023. As usual, the start and finish will be at the Domplatz in Brixen. The event will start at 6.30 pm with the usual warm-up for all participants, the starting signal will be given at 7 pm.

We are already looking forward to many enthusiastic girls and women who want to spend an unforgettable sporting evening together. The run will cover a distance of 4.2195 km through the unique scenery of the old town of Bressanone/Brixen, without timing and without start numbers. The Women’s run Brixen adheres to its message “Women run for women” and this year again donates one third of the registrations to women in need.

Also in 2023 we will continue the tradition that the only condition for participation in the Women’s run Brixen is that all participants will wear a uniform T-shirt, which we will distribute to the participants at the beginning of the run.

A big thank you goes to all the volunteers who support us so diligently year after year. Some of you have been with us from the beginning: you are the magic of this event.

See you soon in Bressanone!

This place is dedicated to the “Angelo di Valeria”, in memoriam Valeria Todeschi.

Valeria was born on October 9, 1990 in Brixen. She was an enthusiastic track and field athlete of the SG Eisacktal sports club. Her smile, joy and enthusiasm were second to none. Her sudden death on April 27, 2012 at the age of only 21 deeply affected us all. The phrase her family chose for the obituary sums up Valeria’s essence:
She had the gift of God to make herself loved by everyone…

This is the only prize that is awarded annually at the Women’s run Brixen. With the “Angelo di Valeria” we want to keep Valeria’s memory alive.

Valeria’s family would like to thank the organizers, who honored the memory of Valeria with the Women’s run Brixen.

Motto of the Women’s run Brixen

A tipically female attribute is her social nature, her willingness to help, her kindness and her open ear for like-minded people in emergency situations. She enjoys the togetherness and solidarity. We are all different in our nature and yet being a woman connects us, the desire for happiness, contentment and last but not least the entertaining comunity. So why not run side by side with like-minded women in the same t-hsirt through the old town of Brixen?

We ladies are just … all different – all women!

be there and feel free - TOGETHER
Previous
Next
All pictures 2022 ❯

Secure your starting place as soon as possible!

The registration is completed with the payment of the starting fee.
In case of problems turn to info@womensrun.it

Each athlete declares on her own responsibility that she meets the health requirements for participation at the Women’s run Brixen.
The organizers assume no liability for any impairment of the well-being ot the participants.

we are still 7 months away from the start of the 11th Women’s run in Brixen. Nevertheless, we would like to ask you to mark the date in red on your calendar. Be there on Friday, 1 September, at 6.30 p.m. when the warm-up takes place at the Domplatz. At 7 pm hundreds of women will run 4.2195 km through the old town of Bressanone for a good cause. We are looking forward to seeing you!

A sea of colours on the cathedral square

10 years Women’s Run Brixen: It was a colour madness that took place yesterday evening at the Domplatz in Brixen. Almost 500 women were at the start – without any competitive character, but only for a good cause!

As early as 4 p.m., the focus was on running in the bishop’s town. The VSS was looking for the “South Tyrolean Sprint Champion”, and children could try their hand at running. They had to cover 30 metres on the cathedral square – cheered on by their mothers and fathers. A little later, they were able to prove their sporting skills themselves. At 7 p.m., about 50 men started a lap through the old town of Bressanone. “This was a solidarity run for the tenth anniversary of the Women’s Run Bressanone, where men could also stand up against violence against women,” say Martina and Petra Ellecosta from the OC team. The 500 women who started at 7.30 pm with a warm-up and then ran 4 kilometres through the old town of Bressanone did this for a good cause. The OC was able to donate 4500 euros to the initiative “es geat di a un – tocca a te”. But the focus was not only on solidarity, but also on community and cohesion.

Many friends, sisters and colleagues took part in the tenth Women’s Run Brixen. “It was a very special experience to see these women, all wearing the same apricot-coloured T-shirt, at the cathedral square,” Anita Stampfer from the OC team was also pleased. The “Angelo di Valeria” was raffled off among all the participants. This work of art was provided this year by the Bressanone artist Karolina Gacke and is intended to commemorate the late runner Valeria Todeschi. The birthday was celebrated in the cathedral square with music by the “Dr. Tinnitus” band. Once again, the biggest women’s race in Bressanone proved yesterday that it is an event that Bressanone would be unthinkable without. With this in mind, the OC is looking forward to the next ten years … 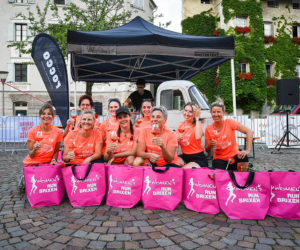 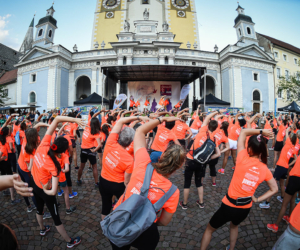 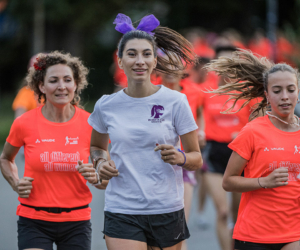 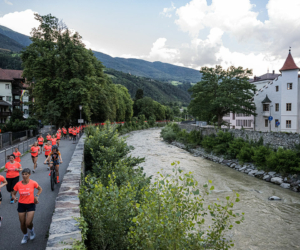 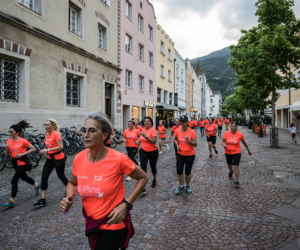 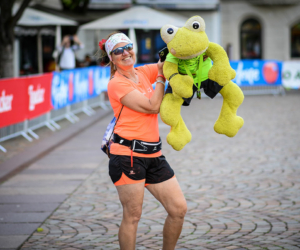 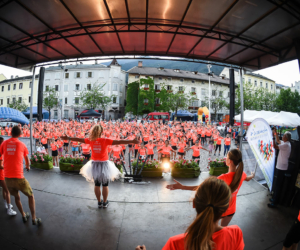 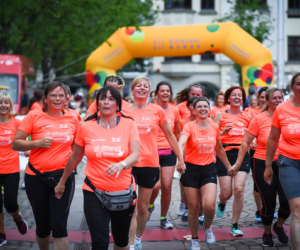 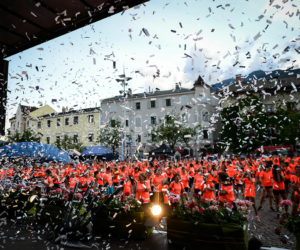 On Friday, 1 July, the Women’s Run Brixen will take place for the tenth time at the Cathedral Square in Bressanone. For this event, the OC has come up with several special features: an apricot-coloured T-shirt that shows off the freshness of the many female participants and awakens a feeling of lightness. But also a pink paper shopping bag that makes every purchase a cool and sustainable experience. Get the cool gadgets by simply running along – and doing good as well. Part of the registration fee will go to the initiative “es geat di a un – tocca a te”.

Collection of the T-shirt and Welcom Bag is possible from 13:00 to 19:00. Please note that for group registrations everything must be collected together. Late registrations are only possible as long as places are available!

For the first time, men can also show how much they support their women and stand up against violence against women. The men will run a lap through the old town at 7 pm – for a voluntary donation. Registration takes place directly at the Cathedral Square from 1 to 6.45 pm. Come men, let action speak – support the women of this world and set a sign against violence against women.

P.S. There will also be a sporting activity for the children. The VSS is looking for the “South Tyrolean Sprint Champion” at the Cathedral Square. No registration required.

Tenth edition of the Women's Run Brixen: Being there is everything!

The Women’s Run Brixen celebrates its tenth anniversary this year. Hundreds of women will run through the old town of Brixen on Friday 1 July at 8pm – without timing, just for a good cause and for themselves!

Ten years ago, the Women’s Run Brixen was organised for the first time. What began at the time as a support programme for the Brixen Dolomiten Marathon is now a successful running event in its own right. In 2019, 800 women participated, this year it will not be as many, but the Dome Square will still fill up on 1 July. “This year we have introduced a maximum limit of 500 participants for organisational reasons,” explains Martina Ellecosta, head of the Women’s Run Brixen. Preparations are already in full swing, not least because the OC is preparing something special for the 10th anniversary. However, the concept itself won’t change much: ‘The run has proven its worth, participants have been coming from all over South Tyrol to Brixen for years to spend a nice evening together with friends, acquaintances or colleagues – even with sporting activities,’ says Ellecosta. The race starts at 8 p.m. from Brixen Cathedral Square and runs 4.2 kilometres through the old town. Along the route, women will be cheered on and at the finish line they can enjoy an aperitif and a great concert with the band Dr. Tinnitus. Anyone can participate, the important thing is to be there. Once again, all participants will wear a uniform T-shirt and warm up with professional help before the race.

The participation fee is 27 euros until 31.05.2022 (thereafter the price will increase). The fee will be donated to a good cause. “Also this year we will support the organisation ‘es geat di a un – tocca a te’, which fights against violence against women,” says Ellecosta. You can register now by sending an e-mail to info@womensrun.it or on the day of the Women’s Run Brixen directly on site at the Brixen Cathedral Square.

Registrations for the anniversary edition open!

Together with the release of our new website the registrations started as well. From now on you can register at www.womensrun.it for the jubilee edition of the Women’s run Brixen on July 1, 2022. Already for the 10th time we are proud to organize this great event for you. On the occasion of this anniversary, we of course came up with many new ideas. In addition to our website, our logo has also undergone a makeover. And some more good news: this year’s edition will also include some fantastic t-shirts again.

10€ per starter will go to “Es geat di a un – tocca a te” again this year. Together we will support this great initiative and set a sign against violence against women.

For organizational reasons there will be a limit of participants again this time, so we would say: get on the computer and register!!! We are looking forward to every one of you.

Would you like to spend a long weekend in Brixen around the Women’s run Brixen? There are run-friendly accommodations that will take care of you and your friends with enthusiasm and pleasure.

Accommodations in Brixen/Bressanone and surroundings

Send the Women’s run Brixen to your friends:

Facebook
Twitter
WhatsApp
Email
Cookie-Zustimmung verwalten
We use cookies, so you can get the best experience on our website. Some of them ("Functional") are necessary, anonymous statistical data ("Google Analytics 4") help us to optimize the service and still others ("Marketing") are for personalized advertising.
Manage options Manage services Manage vendors Read more about these purposes
Settings
{title} {title} {title}