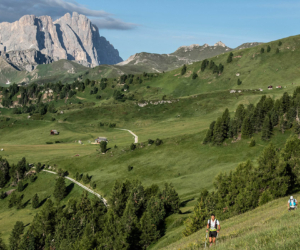 Trailrunning ❯ News ❯ The registrations are in full swing

The registrations for the Brixen Dolomiten Marathon are in full swing

Brixen, February 2, 2022 – 150 days are left until the 12th Brixen Dolomiten Marathon will be held. On the first weekend in July, the heart of the international mountain running scene will once again be beating in the cathedral city in South Tyrol’s Eisack Valley, when around 1600 athletes will venture from the city center up Brixen’s local mountain, the 2562-meter-high Plose. Registrations are already in full swing, which is why all those interested should decide as soon as possible whether they want to be part of the renowned mountain running event on July 2.

After all, 500 places have already been allocated to participants from no less than 27 nations. This year, for the first time, mountain runners from the Seychelles and Hong Kong are among those registered. Since its first edition in 2010, the Brixen Dolomiten Marathon has made a name for itself worldwide and year after year attracts numerous mountain runners from all corners of the globe to South Tyrol. However, the mountain running classic with a length of 42.195 kilometers and 2450 meters of altitude is always dominated by local athletes. In 2021, for example, Helmuth Mair from Brixen and Julia Kessler from Meran prevailed.

But it is not only because of the marathon distance that the mountain running event in the Eisack Valley’s main town has become so popular. On the first weekend in July, there has been something for everyone for several years now. “In addition to the Brixen Dolomiten Marathon, which by the way can also be completed in teams of four or two, there is also the Dolomites Ultra Trail (84 km/4728 hm), which is run exclusively in teams of two, the LadiniaTrail (29 km/1852 hm) and the Villnöss Dolomites Run (22 km/385 hm). Each participant can thus choose a distance according to his or her mood and level of difficulty and still immerse themselves in the breathtaking mountain world of the Dolomites while running,” says OC head Christian Jocher, who is himself an enthusiastic running athlete.

1600 athletes may be present

The field of participants at the Brixen Dolomiten Marathon is limited again this year. The maximum number of athletes is 1600 – of course also in order not to break the frame in times of the Corona pandemic. A reduced participation fee is still valid until March 31. Thus, for the Brixen Dolomiten Marathon 89 euros are due, with the entry fee for the four-person relay set at a total of 160 euros and for the two-person relay at 110 euros. For the couples who want to participate in the Dolomites Ultra Trail, the registration fee is 200 euros, for the participants in the Ladinia Trail 69 euros and in the Villnöß Dolomites Run 55 euros. From April 1st the entry fees will be slightly increased.

Brixen is looking forward to its spectacular mountain running weekend The cathedral city will once again become a (mountain) running mecca this weekend. After all,…

more ❯
Cookie-Zustimmung verwalten
We use cookies, so you can get the best experience on our website. Some of them ("Functional") are necessary, anonymous statistical data ("Google Analytics 4") help us to optimize the service and still others ("Marketing") are for personalized advertising.
Manage options Manage services Manage vendors Read more about these purposes
Settings
{title} {title} {title}