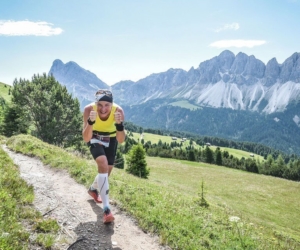 Bressanone/Brixen, 16 June 2022 – A little more than two weeks have to pass before hundreds of mountain runners will once again gather on Bressanone/Brixen’s Cathedral Square to take part in one of the distances of the Bressanone/Brixen Dolomites Marathon. The organisers, headed by Christian Jocher, got in the mood for this year’s edition on Thursday at a press conference in the forum of the partner Durst in Bressanone.

After the mountain running feeling was brought into the room with impressive pictures of last year’s edition, local councillor Bettina Kerer had to admit: “When you see pictures like these, you are already proud to live here in Brixen. I would like to thank the organisers for their commitment and emphasise that they can always turn to us if they need help.” She was one of the political guests of honour invited to the state-of-the-art headquarters of Bressanone’s flagship company Durst on Thursday. Renate Prader, president of the local council, echoed the same sentiment: “As the municipality of Bressanone, we are lucky to have a running event of this magnitude right on our doorstep. An event that appeals to people all over the world and attracts them to our cathedral city.”

So it’s no wonder that the organisers are talking about the “biggest running weekend in South Tyrol”, which will take place this year on Friday, 1 and Saturday, 2 July. The number of participants already shows this: Already 734 athletes have registered for one of the four distances of the Brixen Dolomiten Marathon – not including the participants of the Women’s Run Brixen. No less significant is a second mark: the mountain runners come from no less than 34 different nations, including exotic countries such as the Seychelles, South Africa, the United Arab Emirates or Australia. “When we welcome these participants at the start, you really notice how much they enjoy being here. It’s something special for them as well as for us,” reported OC head Christian Jocher with a sparkle in his eyes.

Four courses, a fun run and lots of spectacle

At the Brixen Dolomiten Marathon, participants are spoilt for choice, and Christian Jocher is well aware of this, as he presented the four routes in detail to the guests of honour and media representatives present. The toughest route is the Dolomites Ultra Trail (84 kilometres/4728 metres in altitude), which has to be completed in pairs. “Not only because it is safer if you always have a partner with you. It’s also more special because you’re not just running for yourself, but also with your partner. You work as a team,” the South Tyrolean running guru revealed.

It is not impossible that Jocher – one of the best mountain and marathon runners in South Tyrol – will also appear at the start in running shoes. But then always on the supreme discipline, the Brixen Dolomiten Marathon. From the cathedral square it’s 42.2 kilometres and 2450 metres of altitude difference up the local mountain, the Plose. “It all started with the marathon 12 years ago,” says the Bressanone businessman, looking back almost nostalgically. The organisers also have two shorter distances in their race programme that lead through the neighbouring valleys. One is the Dolomites LadiniaTrail (29 kilometres/1852 metres in altitude), which, as the name suggests, is classified more in the trail category and will therefore demand everything from even hardy mountain runners. The trail starts in St. Martin in Thurn and runs through the Gadertal valley to the finish on the Plose.

There is also the Villnöss Dolomiten Run (22 kilometres/385 metres in altitude). “It was added to the programme last year to also offer newcomers a starting place. It is the easiest distance, which is especially suitable for those who want to approach mountain running,” Jocher knows. Peter Pernthaler, the mayor of the idyllic valley below the Geisler peaks, is also happy about the second staging of the Villnöss Dolomiten Run: “At first I was sceptical because I feared that we would be overrun by tourists on the race weekend. In the meantime I have to say: all doubts were in vain, it’s a terrific event.” This year, the Villnöss Dolomiten Run will also be held as a Fun Run. No sports medical certificate is required for registration, but no time is taken either.

The same applies to the Women’s Run Brixen, which celebrates its “tenth anniversary” this year and kicks off the running weekend on Friday, 1 July with the starting signal at 8 pm. Up to now, only women have taken part in the four-kilometre run through the old town of Bressanone. This year this is not the case: As an exception, men are also allowed to complete the first lap. On the one hand, to celebrate the anniversary, and on the other hand, to counteract the increasing number of male runners.

Brixen is looking forward to its spectacular mountain running weekend The cathedral city will once again become a (mountain) running mecca this weekend. After all,…

more ❯
Cookie-Zustimmung verwalten
We use cookies, so you can get the best experience on our website. Some of them ("Functional") are necessary, anonymous statistical data ("Google Analytics 4") help us to optimize the service and still others ("Marketing") are for personalized advertising.
Manage options Manage services Manage vendors Read more about these purposes
Settings
{title} {title} {title}